It all started in the 80s. I can remember watching wrestling and it was a big thing to me. As I got older it became an even bigger part of me. Every time it was on the TV, I was in front of the tube, like a rock. No one could pull me away from it. It was my solitude and my escape from reality.
My favorite wrestlers were the Rock-N-Roll Express (Ricky Morton and Robert Gibson), Jimmy "The Boogie Woogie Man" Valiant, and last but not least, the "Nature Boy" Ric Flair ("Whooh!").

At age 10, I asked my Mom "What would you do if The Rock-N-Roll Express came to eat with us?". She replied, "Don't get your hopes up, because it will never happen". Six years later, I was at the old skating rink with my girl (at the time) and my Mom came and told me that someone was at the convenience store, signing autographs. "Who is it?", I asked. She said it was Jimmy Valiant. So I ditched my girl and ran to the store to see if it was true. My mouth dropped to the floor when I saw Boogie. I told him about my interest in becoming a wrestler. He cared. I went to the show with him and we talked about how to get into the profession. He also let me walk him to the ring as his manager.

Two weeks from that epic moment, I went to a graduation ceremony at Boogie's Wrestling Camp and I met Ricky Morton. The next week, I enrolled in the camp and trained for three weeks. I graduated from a wrestling school in Knoxville in the Fall of 1992.

The next thing I knew, I was working as a professional wrestler. One of my bookings was close to home and the Rock-N-Roll Express was in the show. The day of the show, they both came to my house for breakfast. My dream came true.

To wrap this long story up, I was in the business for decades and always hope to become as successful and memorable as my favorites and friends. -Buck 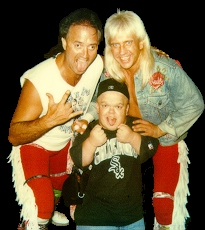